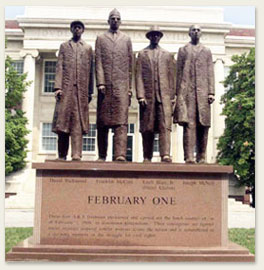 Engraved on the February One Monument base...
These four A&T Freshmen envisioned and carried out the lunch counter sit-in of February 1, 1960 in downtown Greensboro. Their courageous act against social injustice inspired similar progress across the nation and is remembered as a defining moment in the struggle for civil rights.

Artist and creator of the February One monument, Dr. James Barnhill is an associate professor in the Visual and Performing Arts Department in the College of Arts and Sciences at North Carolina A&T State University.
The statue was unveiled on the 42nd anniversary, February 1, 2001. It is located in the circular drive in front of the Dudley Building.

The A&T Human Rights Medal is presented at every February One commemoration to "an individual who has had a positive impact on correcting social injustices and other humanitarian activities. Other humanitarian activities might include human welfare and social reform, acts of heroism, promotion of fellowship, dedication to technological discovery, academic advancements or contributions, diplomatic endeavors, and community contributions". For nomination and more information please go to: http://www.library.ncat.edu/hrm

2006 No Human Rights Award given. However given out was the NC A&T State University Service Award and that was given to four former state legislators representing Guilford County:  Honorable Flossie Boyd-McIntyre, Mary L. Jarrell, William N. Martin, and Robert G. Shaw.