The New Jim Crow: Mass Incarceration in the Age of Colorblindness 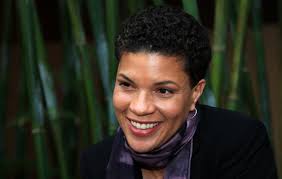 Michelle Alexander is a highly acclaimed civil rights lawyer, advocate, and legal scholar. In recent years, she has taught at a number of universities, including Stanford Law School, where she was an associate professor of law and directed the Civil Rights Clinics. In 2005, she won a Soros Justice Fellowship, which supported the writing of The New Jim Crow, and that same year she accepted a joint appointment at the Kirwan Institute for the Study of Race and Ethnicity and the Moritz College of Law at The Ohio State University. Since its first publication,The New Jim Crow has received rave reviews and has been featured in national radio and television media outlets, including MSNBC, NPR, Bill Moyers Journal, Tavis Smiley, C-SPAN, and Washington Journal, among others. In March, the book won the 2011 NAACP Image Award for best nonfiction.

Prior to entering academia, Alexander served as the director of the Racial Justice Project for the ACLU of Northern California, where she coordinated the Project’s media advocacy, grassroots organizing, coalition building, and litigation. The Project’s priority areas were educational equity and criminal justice reform, and it was during those years at the ACLU that she began to awaken to the reality that our nation’s criminal justice system functions more like a caste system than a system of crime prevention or control. She became passionate about exposing and challenging racial bias in the criminal justice system, ultimately launching and leading a major campaign against racial profiling by law enforcement known as the “DWB Campaign” or “Driving While Black or Brown Campaign.”

In addition to her nonprofit advocacy experience, Alexander has worked as a litigator at private law firms including Saperstein, Goldstein, Demchak & Baller, in Oakland, California, where she specialized in plaintiff-side class-action lawsuits alleging race and gender discrimination.

Alexander is a graduate of Stanford Law School and Vanderbilt University. Following law school, she clerked for Justice Harry A. Blackmun on the U.S. Supreme Court and for Chief Judge Abner Mikva on the U.S. Court of Appeals for the D.C. Circuit. She currently devotes much of her time to freelance writing; public speaking; consulting with advocacy organizations committed to ending mass incarceration; and, most important, raising her three young children—the most challenging and rewarding job of all.

More About the Author